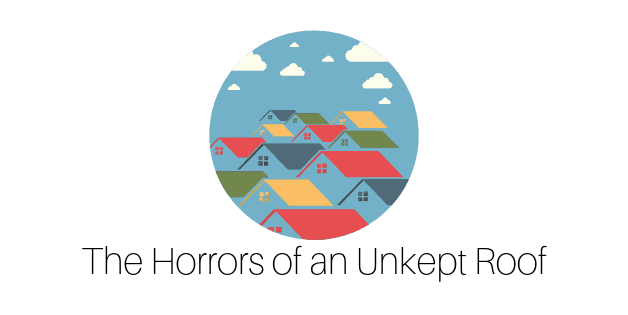 With Halloween season in full gear, we think it’s an excellent time to tell you about the most terrifying of horror stories, the Horror of the Unkept Roof!

Not so long ago, in a neighborhood just like yours, there lived a homeowner. The homeowner was happy with their home and their life, believing everything was going grand. Summer was gone and fall had begun. There were beautiful trees all around turning the most gorgeous of fall colors. The air was light and crisp, with just a hint of cold to give you an excuse to wear all the most snuggly sweaters you had in your closet. It was a perfect time of year to sit outside with a small fire and a cup of hot cocoa. (With just a little bit of bourbon in it!)

You see, the homeowner was so caught up in their beautiful life, they never once stopped to think about the part of their home that was helping to keep them dry all day, and warm at night. The part of their home that had so dutifully watched over them for years, making sure they were safe, was never really noticed, never really taken care of. So many long winters of ice damming ignored. So many spring storms that beat and battered away. So many hot summer days that cooked the shingles. All while the homeowner went along, not giving it a single thought.

Finally, it happened. Maybe it was a leak that started small and slowly expanded from freezing. Maybe it one too many bits of fallen debris. Whatever the cause, the homeowner’s roof gave in. Water leaked into their attic, soaked the insulation and ran down the walls. Everything that had tried to attack the house could now come in. And the homeowner was left defenseless.

But like any horror story, there’s those of you in the audience that are screaming at the homeowner! Look up! Look out! Do something! The mistakes are so obvious, the error is so easy to correct! Don’t go down that dark hallway when you hear someone breaking in, and don’t leave your roof unkept! Get a roof washing and inspection from New Heights Roofing and you can be safe from the horror! Contact us today!

Questions to Ask Before You Get a New Roof

Our Favorite Memories of This Year

How Does Winter Damage Your Home?